Another first for ACC 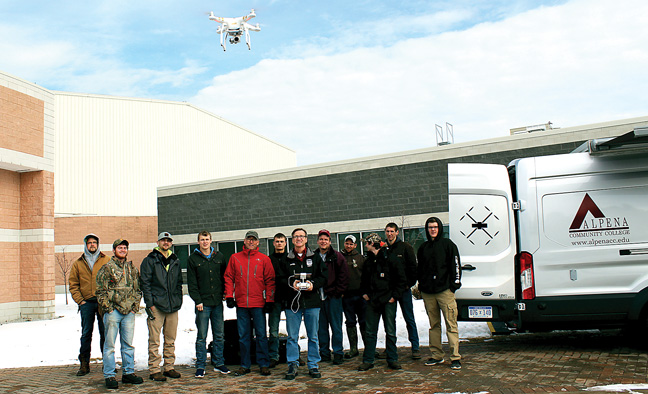 News Photo by Steve Schulwitz Alpena Community College unmanned aircraft systems instructor Brian Dawson, center, controls a drone that is taking photos and video of the first graduating class of the college’s pilot prep course during an event Friday. The students will take the FAA test for certification.

ALPENA — Twelve utility tech students at Alpena Community College completed their unmanned aircraft systems pilot prep course Friday and are ready to proceed to take a Federal Aviation Administration test for certification. It is the first class to complete the new program.

The college’s unmanned aerial system class is four weeks long and includes two hours of hands-on training with the drones. Unmanned aircraft systems instructor Brian Dawson said the drone training coupled with the utility training will go a long way toward helping the students get quality employment after they graduate.

“They are learning the regulations, operations and mission planning to get their pilot certificate,” Dawson said. “This field is in its infancy and there is a demand for pilots. These students are going to be some of the first ones to go to an employer and tell them they have this skill set.”

Dawson said drone use for commercial purposes is only going to increase as the FAA establishes firm guidelines and regulations. He said drone pilots are needed in the utility market, as well as agriculture.

“Companies know about this type of technology and how they want to use it, but never had the rules or pilots,” Dawson said. “These kids will actually be able to get a license and get hired by those companies.”

Dawn Stone, director of Trade Adjustment Assistance Community College and Career Training grant, said seeing the equipment the grant made possible pay off is exciting. She said now the students have completed their training in Alpena, they will test for the FAA in Oscoda at Kalitta Air at the Oscoda-Wurtsmith Airport. She said she believes the students are ready for the test because the training they received at ACC was not simple, but prepared them well.

“When you almost have to have the same amount of knowledge as a regular pilot it is intense,” Stone said. “It is a lot of material to cover, especially in four weeks.”

During their final session Friday the new mobile cockpit and several drones of various sizes were outside. Dawson clicked photos and recorded videos of the event with a quad-copter drone from high in the sky above campus.

Stone said the next prep course will begin March 10 and will be taken by utility tech students again. She said the plan after that is to open the course up to the public.

“We’re hoping to do that in the summer,” Stone said.