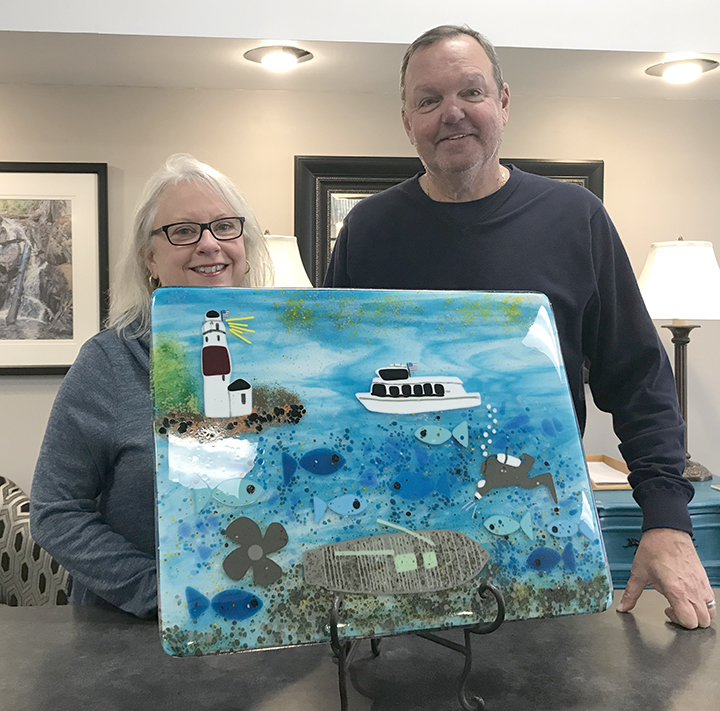 This glass art piece depicting the lighthouse at Middle Island, the Lady Michigan glass-bottom tour boat, a diver with the iconic Monohansett shipwreck in Thunder Bay National Marine Sanctuary, and fish, is on display in the gift shop at Great Lakes Maritime Heritage Center for Giving Tuesday. Anyone who donates $25 or more to the Friends of Thunder Bay Marine Sanctuary during the 24-hour period on Tuesday will get a chance to win the piece, created and donated by Peggy and August Matuzak of Forty-Five North Art Gallery, and valued at $350.

ALPENA ­– Thirty-three local nonprofit organizations have 24 hours to get as many donations as possible on their biggest fundraising day of the year — Giving Tuesday.

This Tuesday, from 12 a.m. to 11:59 p.m., those nonprofits will be eagerly accepting donations through the Community Foundation for Northeast Michigan’s website, which will have a countdown timer running prior to and during the 24-hour donation window. Donations can be made online at cfnem.org/givingtuesday, or in person on Tuesday at the CFNEM office at 100 N. Ripley Blvd., Ste. F.

The organization with the largest sum after the 24-hour period closes will garner the coveted Grant the Giving Tuesday Golden Goose. Last year’s winner was Thunder Bay Theatre.

“2019 marks our fifth year of hosting Giving Tuesday Northeast Michigan,” CFNEM Executive Director Patrick Heraghty said in a news release. “We see every day how generous our entire region is, and we hope they’ll show up online again on December 3rd to make this year another successful year for the nonprofits in our area. We all need it.” 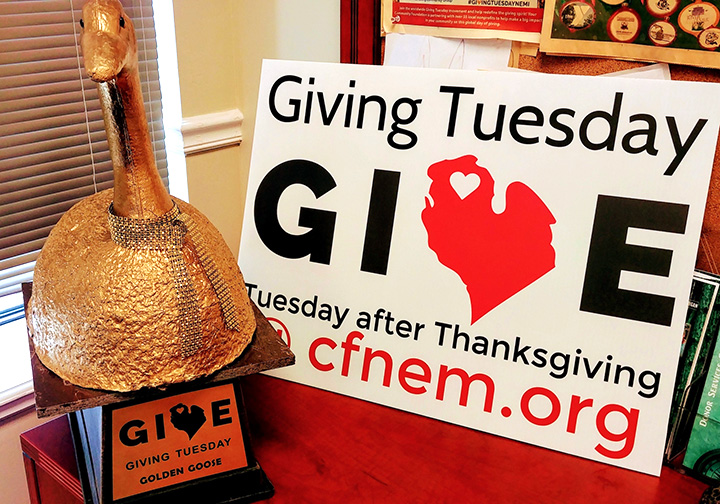 Courtesy Photo The participating nonprofit organization with the most donations garnered on Tuesday will be awarded Grant the Giving Tuesday Golden Goose, pictured here.

Giving Tuesday as a global day of giving is now in its eighth year. The 24-hour giving event is held in the U.S. annually on the Tuesday after Thanksgiving, following the widely recognized shopping events, Black Friday, Small Business Saturday and Cyber Monday. The hope is that people will set aside a few minutes from holiday shopping to give back to their community through the charities and causes they support, the release stated.

Heraghty also noted that in addition to the participating organizations, donors may also make donations to any fund at CFNEM or its affiliate foundations as a Giving Tuesday gift.

The total amount donated to each organization will be announced at an event shortly after Giving Tuesday with participating nonprofits at the CFNEM headquarters. 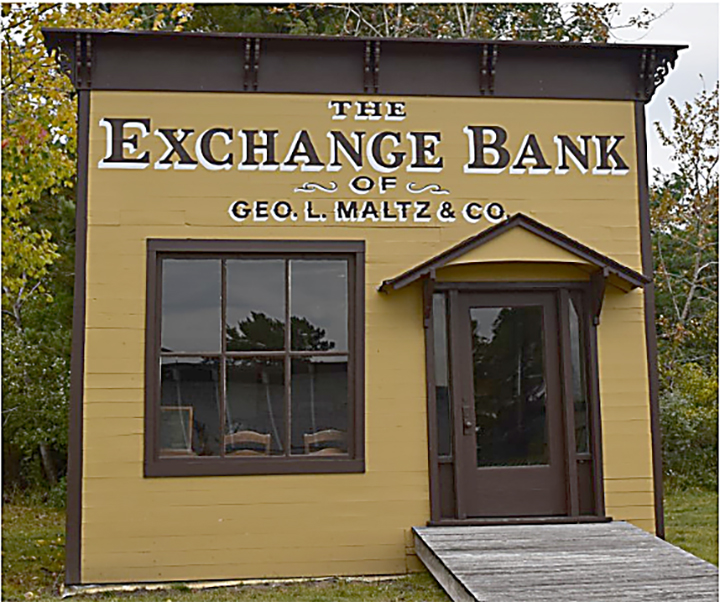 Courtesy Photo The Besser Museum for Northeast Michigan’s Giving Tuesday campaign focuses on restoring and repairing the historic village behind the museum. Above is the 1872 Maltz Exchange Bank, donated to the museum in 1972 by Frankand Helen Gaasch, and James Gaasch.

Friends of Thunder Bay Marine Sanctuary is hoping for a Giving Tuesday boost.

The organization is offering an incentive: Everyone who donates $25 or more will be entered to win a one-of-a-kind piece of glass artwork made and donated by August and Peggy Matuzak, owners of Forty-Five North Art Gallery.

“Peggy and Augie said that they had this piece of glasswork that they had done originally as part of a competition that the sanctuary held,” said Katie Wolf with the Friends of Thunder Bay Marine Sanctuary. “And, knowing that we were trying to raise money, particularly for the waterfront project, they wanted to know if they could donate it, if I could use it as a way to raise funds for the Friends… And we thought Giving Tuesday would be a perfect way to do that.”

“The artwork really does capture so much of what we do,” Wolf said.

She said raising funds is crucial right now, since the Lady Michigan was in need of repairs and out of commission during the end of the peak summer season, Aug. 7 through October.

“Right now, we’re trying to recover from repairing the engine that went out this summer on the Lady Michigan,” Wolf said. “That engine repair cost us about $34,000, but that’s only part of it, because we weren’t able to sell tickets at that time, and we were still paying the crew, so altogether, the expense, the loss of not being able to have the boat out there, was another $100,000. So we’re down about $134,000 in our bottom line. So … Giving Tuesday this year is very important to us.”

Peggy Matuzak said it took her and husband August a couple days to complete the piece, which features three layers of glass, and is valued at $350.

“Each piece had to be cut out individually on a wet ring saw,” she said. “So, there’s a little bit of time in that, but it was fun, special, and it captures Alpena.”

They made the piece for the contest two years ago.

“You can tell lots of detail and TLC went into that piece,” Wolf added.

Wolf added that technological improvements have been made to the Lady Michigan which will enhance the experience when it reopens for business from mid-May to mid-October 2020.

The Besser Museum Historic Village stands as a testament to the pioneering spirit of our past, the museum’s 2019 Fall Passages newsletter explains. The museum is seeking donations to help protect, preserve and interpret this unique collection of historic resources.

“Because there is no designated special fund for providing long-term preservation or the exhibit development of these historic gems, the Besser Museum decided this year to earmark any Giving Tuesday funds received specifically for the Historic Village exhibit,” the newsletter states. “These timeless treasures provide understanding into the livelihoods of the citizens who settled and developed Northeast Michigan. Keeping these buildings opened to the public fosters an appreciation for the technological advancements and convenient comforts we enjoy today.”

The Historic Village is a primary resource available to help teachers and students meet the Michigan Education Social Studies K-4th grade benchmark to use historical thinking to understand the past in the local community and the state.

“The Besser Museum acquired these historic buildings from concerned citizens recognizing the importance of preserving a part of our community’s history,” the newsletter continues. “The first building arrived 48 years ago, and the last was donated 29 years ago. This collection is unique in that the historic buildings are all from the same time period and relatively the same location.”

Funding was provided by different individuals and civic groups to cover relocation costs for each building to the museum. It has since been the sole responsibility of the museum to continue to raise funds needed for preservation and exhibit development which provides historical interpretation and accessibility for visitors.

Details of each structure are noted here.

¯ In 1971, the 1895 McKay Cabin located in Wilson Township of Alpena County, was donated to the museum by the Gilbert family. Zada Gay Dann, John McKay’s daughter, financed the relocation of the cabin to the museum. The cabin will require much-needed repair to ensure its preservation.

¯ In 1972, the 1872 Maltz Exchange Bank located in Alpena was donated to the museum by Frank and Helen Gaasch, and James Gaasch.

¯ In 1981, the 1895 Green School one-room schoolhouse, located in Green Township was donated to the museum by Mr.

¯ In 1990, the 1912 Spratt Church located in Green Township was relocated to the museum. More repairs and exhibit development are needed.

The museum receives no continuing financial support or taxpayer revenue from federal, state, or local governmental entities, and relies on donations to protect and preserve its precious artifacts.

The annual operating budget for the entire museum is approximately $430,000. Operational support is generated through admission fees, membership dues, donations, awarded grants, and fundraising efforts. The Besser Foundation provides a portion of the annual operational support honoring Jesse Besser’s original intent for the museum to be an active center for the cultural life of the community and the schools.

Special projects, including the preservation and exhibit development for the Historic Village are not included in the museum’s annual operation budget. Funding for these projects is raised through special fundraising campaigns like Giving Tuesday. For more details, contact the museum at 989-356-2202 or visit bessermuseum.org.

Participating nonprofits in Alpena, Alcona, Montmorency and Presque Isle counties with donation links on the CFNEM website include:

This glass art piece depicting the lighthouse at Middle Island, the Lady Michigan glass-bottom tour boat, a diver with the iconic Monohansett shipwreck in Thunder Bay National Marine Sanctuary, and fish, is on display in the gift shop at Great Lakes Maritime Heritage Center for Giving Tuesday. Anyone who donates $25 or more to the Friends of Thunder Bay Marine Sanctuary during the 24-hour period on Tuesday will get a chance to win the piece, created and donated by Peggy and August Matuzak of Forty-Five North Art Gallery, and valued at $350.

Courtesy Photo The participating nonprofit organization with the most donations garnered on Tuesday will be awarded Grant the Giving Tuesday Golden Goose, pictured here.

Courtesy Photo The Besser Museum for Northeast Michigan’s Giving Tuesday campaign focuses on restoring and repairing the historic village behind the museum. Above is the 1872 Maltz Exchange Bank, donated to the museum in 1972 by Frankand Helen Gaasch, and James Gaasch. 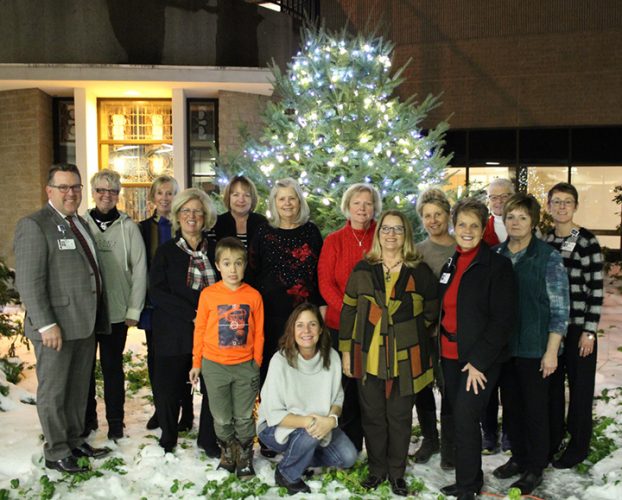 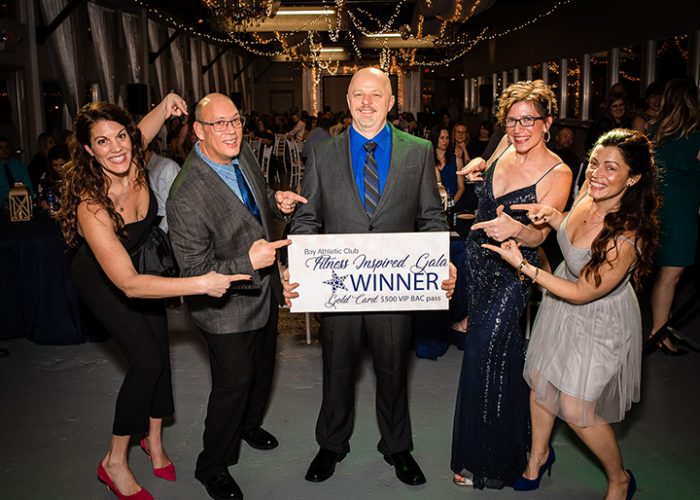 Changes in voting procedures, approved by voters last November, will be reviewed with citizens in two different ...

Even as Trump claims two victories on trade, doubts remain

In Texas and other states, voters are now facing a variety of barriers