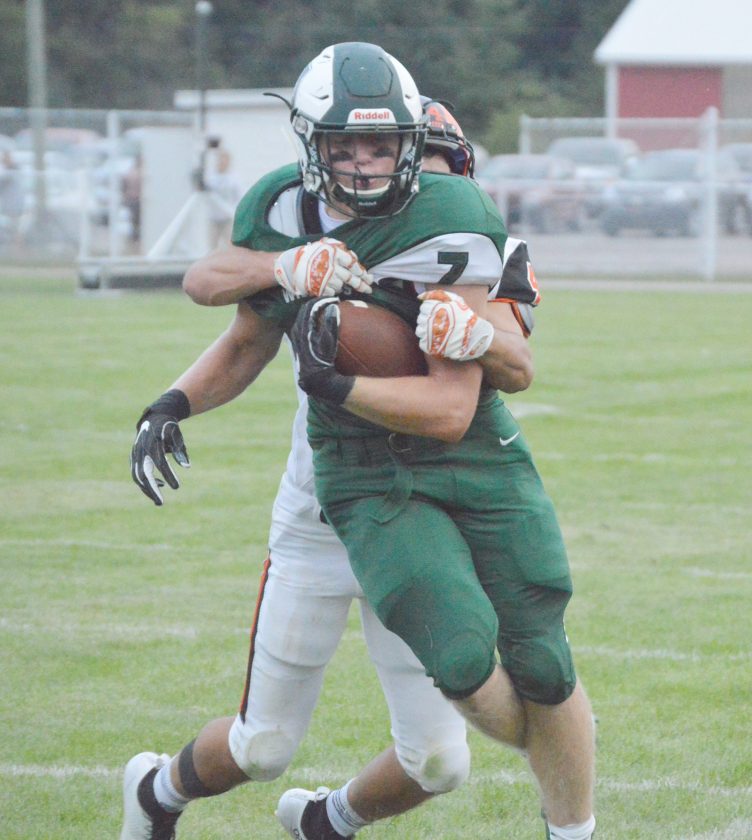 Just two weeks into the season, the Alpena High football team realizes that there is a lot riding on this Week 2 matchup against the Sault Ste. Marie Blue Devils.

Mistakes hurt the Wildcats in their season opener a week ago at Escanaba and Alpena had a long bus ride to think about the 34-13 loss in Week 1 and this week, the Wildcats have focused on correcting those mistakes and doing the little things in order to have more success tonight in what head coach Eric Mitchell believes is a must-win game.

“Our focus this week has been the little things. Everything that we are doing this week, from waking up on time, making your bed, eating breakfast before school, showing up to class on time and making sure that we know what we can control. Friday night is a perfect example, we control snapping the ball too high, jumping offsides and putting the ball on the ground, none of those are forced errors so if we can control of what we can take control of, we’ll be just fine,” Mitchell said. “This is without a doubt a must-win game. Before the season, it was clear that this game against Sault Ste. Marie was a game that we need to win. Every game is a must-win in high school football because you only get so many opportunities. It’s a must-prepare week and we have to prepare and take care of the little things. If we do that we will be fine on Friday night.”

Not only do the Wildcats enter tonight’s matchup with a must-win mentality because an 0-2 start to the season would put them in a big hole early, but Alpena has a little added motivation as the Wildcats will play their home opener in front of what is expected to be a packed house for the teams first ever game at Park Family Field at Wildcat Stadium.

Alpena has been practicing all week on the new turf field, getting used to the playing surface that they will be playing on Friday night and the Wildcats want this first football game game played on this field to be a memorable one.

“There’s definitely extra motivation to be playing in our home opener and everything that comes with it. It is also one more thing that we need try and block out. We knew their were going to be so many things this week that are non-football related that come up and all of the extra stuff that comes with the new field and the home opener is one,” Mitchell said. “There are so many little things that we have just had to deal with that haven’t been football related. It’s motivation for us and we’re happy to be here, happy we’ve been able to practice on our game field and we’re excited to get out here, but for us, it doesn’t matter where we’re playing. We obviously want to put on a show for our fans, but at the end of the day, this is a must-win game.”

The Wildcats are hoping recent history repeats itself as Alpena has gotten the better of Sault in the last three meeting, though the games have been tightly contested.

The Wildcats will need focus their attention on Sault sophomore quarterback Jakob Davie who has another year of experience under his belt.

Alpena seen first hand a year ago that Davie is capable of making plays with his arm and his legs and the Wildcats must be able to contain the Blue Devils signal caller in order to find success.

“He (Davie) is real elusive and he’s pretty good. He definitely likes to roll to his left to throw, not great at setting his feet, but when he does set his feet, he sure can throw the ball. He is definitely looking to throw more than run, but with that being said, if he sees a bunch of green space, he’s going and he’s quick enough to really hurt you,” Mitchell said.

Along with doing the little things and correcting last weeks mistakes, Alpena will hope to have similar success running the football as the backfield duo of Jordan Schultz and Eli Winter combined to rush for nearly 300 yards in the Week 1 loss and the Wildcats are looking to find some more consistency through the air and connect on a few more passes than they did a week ago.

“I think we moved the ball well and ran the ball well. We spread it out well and I thought that we threw the ball okay, but I definitely want to focus on that. Our offense looked better, but we need to make sure we can hit the deep ball and not just the flat route,” Mitchell said. “We pass blocked well and we just need to keep getting better and work on doing those little things in order to be ready for Friday night. I think we’re in the right mind set and we’re all looking forward to getting that first win.”