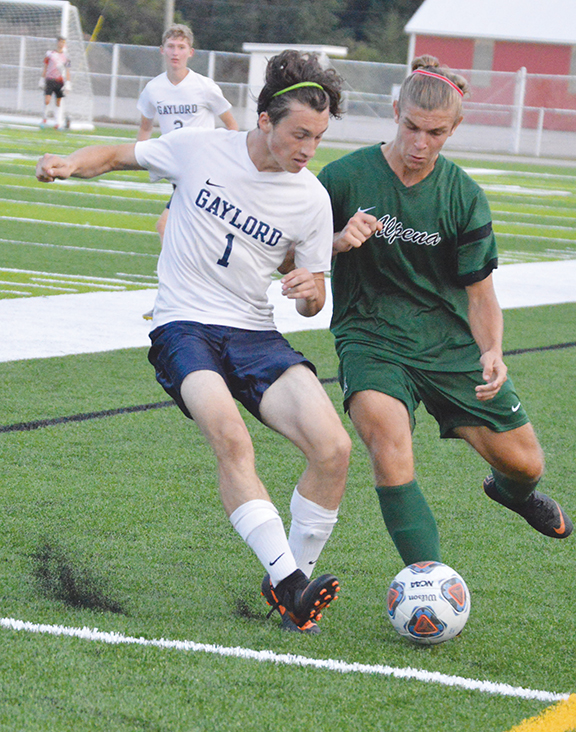 News Photo by James Andersen Alpena’s Craig Tagliareni, right, battles Gaylord’s Marcus Osborne O’Rourke for control of the ball during the first half of a boys soccer game on Tuesday at Park Family Field at Wildcat Stadium.

Gaylord got the better of the Alpena High boys soccer team on Tuesday.

Ian Busch and Kyler McKenzie both scored and the Blue Devils topped Alpena 2-0 in a battle for first-place in the Big North Conference at Park Family Field at Wildcat Stadium.

In a matchup of two teams ranked in Division 2–Gaylord is 12th, Alpena is 13th–the Blue Devils (10-1-1, 2-0 BNC) got a late first-half goal on a corner kick, added an insurance goal in the second half and got a big-time performance out of keeper Jacob Pietrzak. The senior goaltender finished with five saves and made several key stops to end Alpena’s seven-game losing streak.

“Two teams come in and basically it’s going to be decided, when there’s two ranked teams, by the team that makes the fewest mistakes and the team that capitalizes on the mistakes. Their goal keeper played very well. We were very unfortunate,” Alpena coach Tim Storch said. “There were a lot of shots that kind of hit him from a couple corner kicks in the first half to our flurry in the second half.”

The Wildcats (7-1-1, 1-1 BNC) had their fair share of chances, but couldn’t get a ball past Pietrzak. With 15:04 left to play, Ivo Arvidsson-Ullberg sent a ball to the left side of the net, but Pietrzak was there to make a diving stop and push the ball aside. Less than two minutes later, he caught a shot straight on and made another big stop 10 minutes into the second half when he leapt high to get his hands on a free kick.

Busch gave Gaylord more cushion, connecting with 13:27 left on a goal that got past Alpena keeper Wenton Harrison off a deflection.

Harrison made seven saves for the night, including several point blank chances, but Storch said he thought Gaylord’s two goals were shots his senior keeper would like to have back.

“Wenton, as good as he’s been, I think he’d like both of those goals back. The one service that they scored on (McKenzie’s goal) with the height and the size and the strength we’ve got in the backfield, we should not give up a goal on a flank service,” Storch said. “That second goal, he knows better (and) he’s got to kick that ball out of bounds.”

McKenzie broke a stalemate with 1:44 left in the first half, redirecting a corner kick to put Gaylord up for good.

Alpena had its chances against Pietrzak in the first half too, but came up empty. Arvidsson-Ullberg was denied on a close shot with 13:40 left and Alpena was turned away again moments later when he stopped a header off of a free kick.

The Wildcats are off to a solid start through their first nine games, but Storch said his team still has work to do to improve, pointing to improvements in conditioning and players healing up from injuries as two key areas to work on.

“This would have been nice to win, especially at home. But it’s only the second game in the league and it’s going to be a long 10-game battle,” Storch said. “We’ll get another chance at them in the league and we expect to be a factor in the league race, just as they do.”

Alpena returns to action on Thursday when it hosts Cadillac at 7 p.m.