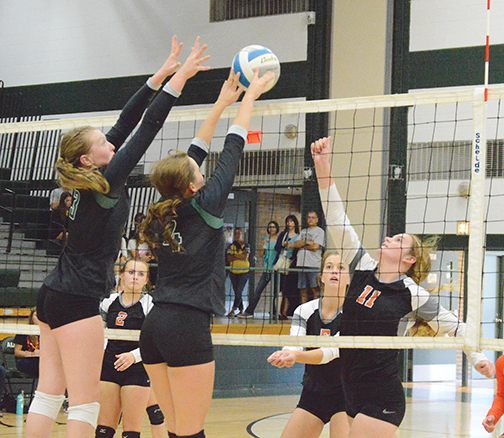 News Photo by James Andersen Alpena players Allie DeRocher (3) and Macy Dickinson (4) attempt to block an attack from Rogers City’s Jeffra Dittmar during a match at the annual Alpena quad on Thursday at Alpena High School.

After a poor performance on Tuesday, Alpena High volleyball coach Melissa Doubek lit a fire under her team during a heart-to-heart discussion the next day.

The message: Learn from your mistakes and take ownership on the court.

It didn’t take long for the Wildcats to get the message.

Buoyed by a stronger, smarter play, the Wildcats swept three matches during its annual home quad on Thursday at Alpena High School.

“We came out strong tonight. We were capitalizing on free balls, running our offenses and our serving was the best I’ve seen this year,” Doubek said. “The girls told me that what I said (during our meeting) was needed and it got them thinking that they need to take ownership out there.”

The Hurons took only one of their three matches on the day, but Rogers City coach Erin Brege was pleased with what she saw from her team.

“As a team, we’re making strides,” Brege said. “It was great to see them working and improving. Brooke Saile had a strong game for us defensively; she was in there digging it up.

Saile finished with 14 kills, 28 digs and five kills for the Hurons and libero Kristin Brege had 46 digs, five kills and seven aces.

Playing in its first matches of the season, Hillman held its own against its opponents and had several standout performances.

Angelina Hunt had six kills, 10 digs and one ace for Hillman and Emalie Lis had six kills, two aces and 13 digs. Makenna Grulke had 12 kills, an assist, 20 digs and three aces and Emma Libby had three kills, 16 assists, 35 digs and two aces.

“I think Hillman did a good job for our first games. I’m very proud of the girls’ effort and attitude,” Hillman coach Kim Weiland said. “They really stepped up their game.”