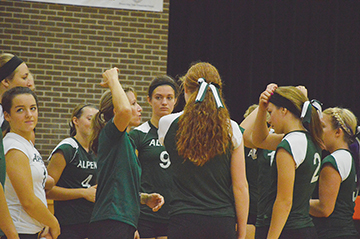 News File Photo Alpena volleyball coach Melissa Doubek talks to her team during a timeout in this 2014 file photo. Doubek is returning to the sideline as Alpena’s coach again this season.

The Alpena High School volleyball program will have a familiar face on the sideline next season.

“I’ve always loved coaching volleyball and I’m expecting a great year,” Doubek said. “(Athletic director) Tim (Storch) called me a few weeks ago and asked if I could help out. I started this program and I couldn’t leave the kids without a coach.”

Doubek started Alpena’s club team in the early 1990s and was Alpena’s coach during its first varsity season. The Wildcats won their first match, defeating Atlanta on Dec. 13, 1993.

She served as Alpena’s varsity coach nearly every season until 2015 and Stacey McEwen led the program for the 2016 and 2017 seasons.

“Coach Doubek will provide instant credibility and steady leadership to our volleyball team,” Storch said in a press release. “We are excited to have her energetic presence and experience back at the helm of this program.”

Doubek returned briefly in 2017, coaching Alpena during a district game at home against Traverse City Central.

This time around, she’ll coach a team that could return at least half a dozen players from last season.

In addition to coaching volleyball again, Doubek will be kept busy co-teaching a 10th grade biochemistry class with Jenny Poli, which will be part of a new project-based learning curriculum centered around practical applications of science.

“We’ll learn a lot of great lessons and build character in our young ladies,” Doubek said. “It should be an exciting year.”

Amid the ongoing circumstances of the COVID-19 pandemic, the 19th annual Aliferis Race at MidMichigan Medical ...