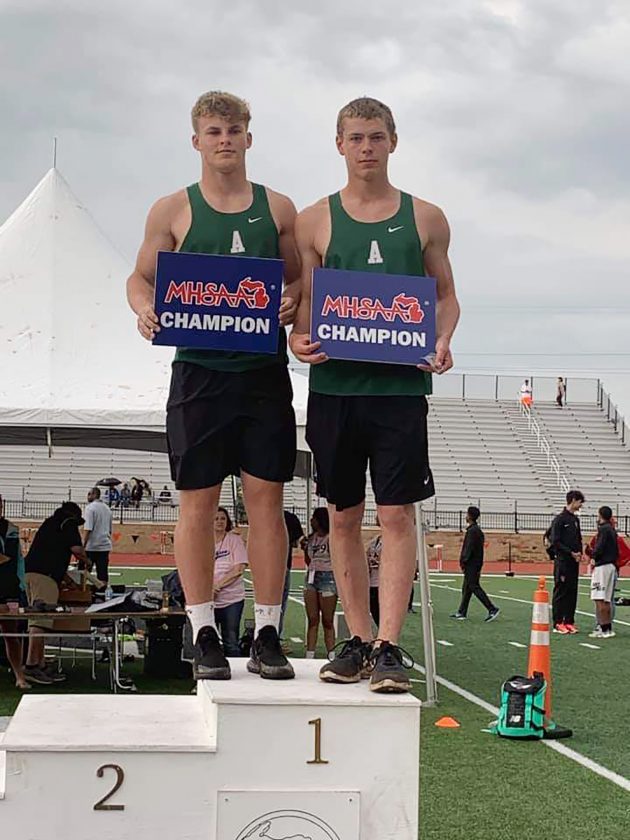 Courtesy Photo Alpena High juniors Eli Winter, left, and Gabe Bullis won state championships at the Division 1 finals on Saturday in East Kentwood. Winter won a title in the discus and Bullis paced the field in the pole vault. The two wins marked the first time since 1997 that Alpena has won an individual title at the finals.

EAST KENTWOOD — For the first time since 1997, Alpena High School has a state track champion.

Eli Winter broke his own school discus record to win a state title and Gabe Bullis paced the field in the pole vault to give the Wildcats a pair of state champions during the Division 1 finals Saturday at East Kentwood High School.

Winter was hoping to hit 180 feet in the discus at the finals and did so, leading the field with a throw of 180 feet, 1 inch. This marks the fourth time this season Winter has broken the school discus record. He added an all-state finish in the shot put too, finishing seventh with a toss of 51 feet, 6 § inches.

Bullis, who took third last year with a vault of 15 feet, cleared 15 feet, 3 inches this time around, beating his closest competitors by three feet.

The state championships earned by Winter and Bullis are the first earned by Alpena athletes at the finals since Melissa Brousseau won the second of her back-to-back shot put titles in 1997.

Led by Winter and Bullis, the Alpena boys finished third as a team and had all-state placers in five events. Alpena finished with 31 points, trailing only East Kentwood (63.5) and Ann Arbor Pioneer (43). Alpena’s athletes also overcame some weather delays to turn in solid performances.

“It was awesome. We were crunching numbers going in and thought we could finish anywhere from second to fifth. Third is awesome,” Alpena coach Collin Riffert said. “We had a lot of great performances.”

All-state honors are given to the top eight athletes/teams in each event.

After a strong regular season that included a Big North Conference championship, the senior-laden Wildcats endured a let down at the worst possible time as Alpena had its season ended much sooner than they expected as the Wildcats were shut out, falling to the rival Trojans 1-0 in a Division 1 district semifinal contest.

After swinging the bats well all season, the Alpena bats went ice cold Saturday as the Wildcats were held to just one hit and held in check by Trojan southpaw Marty McDonald.

McDonal only struck out four, but he was in cruise control much of the game as he allowed just four Alpena baserunners and no-hit Alpena until Kyle VanDusen singles with one out in the top of the sixth inning.

Central scored the only run of the game in the home half of the sixth when Matt Corrado led off with a single and came around to score on a two out double off the bat of Dominic Palamara which proved to be the game-winning run as Alpena was set down in order on three ground balls in the seventh as the Wildcats had their season end earlier in disappointment.

Bruz Copping was the tough luck loser for Alpena as he pitched all six innings, allowed four hits, one earned run and struck out six Trojan batters.

Central ended up falling to TC West in the district championship game.