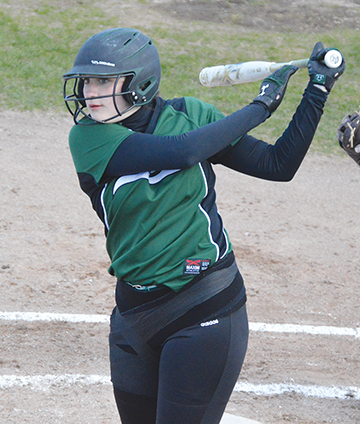 With the regular season complete, area softball teams are ready to begin what they hope will be long and successful postseason runs.

For teams like Alpena, Rogers City and Onaway, anything less than a district championship and appearance in a regional championship game would likely be a disappointment.

The Wildcats return nearly all of their starters from a team made some serious noise last postseason, making it all the way to the Division 1 quarterfinals before falling to eventual state champion Caledonia.

Alpena returns senior Emma Fraser and juniors Jade Schultz and Allie and Abbie Funk who have spent much of the year as Alpena’s top four batters in the order. The Wildcats are loaded with experience and will not be afraid of the big stage. They’re fresh off of winning a ninth Big North Conference championship and are ready to defend their district crown.

They begin play Saturday at noon in a district semifinal game against Gaylord at Traverse City Central.

“I think the competitive juices will be flying come Saturday. I like the situation we are in where we play the second game of the day and if we’re fortunate to win the semifinal we can play right after and it feels just like a normal doubleheader,” Alpena coach Paul Marwede said. “We have prepared all season for this time of the year and we’ve played a strong schedule throughout the year to prepare us and now it’s time to come out and hopefully play our best ball on Saturday.”

If Alpena is victorious in the semifinal matchup, it will advance to play the winner of Traverse City West or Traverse City Central at 2:30 on Saturday.

The Hurons made it back to the state semifinals last year, but fell to Coleman 2-0 in East Lansing.

Rogers City put together another strong regular season despite losing the top three batters in its order from a year ago in Kayla Rabeau, Hannah Fleming and Jayna Hance. All three were all-state players, but Rogers City is confident and ready to make another run at a state title.

One key to the Hurons’ success this season has been Kyrsten Altman, who pitched during Rogers City’s postseason run last year. Altman has made improvements and has looked sharp in the circle this season.

As good as Altman has been in the circle, Rogers City does not lack offense and its lineup is deep.

Senior Taylor Fleming provides a big a bat from the left side and has spent most of her time batting behind Altman in the two spot in the Hurons order. Along with Fleming, Amanda Wirgau, Catheryn Hart and Jeffra Dittmar provide Rogers City with plenty of offensive firepower in the middle of the order.

“I think we have really good team chemistry and we’ve been in some tight games here in the last few weeks. It’s just one pitch at a time, one at-bat at a time and one play at a time and that’s the only way you can approach the game at this point. If we play Hurons softball we think good things will happen,” Rogers City coach Karl Grambau said. “We’re going to do the best we can to represent our team, our school and our community. We just want to look ourselves in the mirror at the end of the day and just say we did the best we could and we’ll see what happens.”

The Hurons begin district play with a semifinal matchup against Johannesburg-Lewiston on Saturday at noon in Atlanta.

Hillman and Atlanta begin district action on Saturday when they square off at 10 a.m.

The Tigers survived and advanced with a 7-6 PreDistrict win over Posen on Tuesday.

The two winners will play in the championship game set for 2 p.m. on Saturday.

The Onaway softball team is looking to bring home a championship of its own after coming up short the past few years. The path to a district title has been no easy task and the road to a district championship won’t be any easier this year.

Onaway plays Wolverine on Friday at 1 p.m. in a district semifinal matchup and has the hopes of advancing and to a potential heavyweight showdown with Ski Valley Conference rival Indian River Inland Lakes in a district championship game at 3 p.m.

Onaway and Inland Lakes split a doubleheader late in the season and both teams shared a conference title. There will be no more sharing on Saturday and only one team will advance to regional play.

The final district will be played in Mio where the Thunderbolts will take on Alcona Saturday at 10 a.m.

The winner of that game will wait and play the winner of the Au Gres, Whittemore-Prescott game that will be played at noon with the championship game scheduled for 2 p.m.