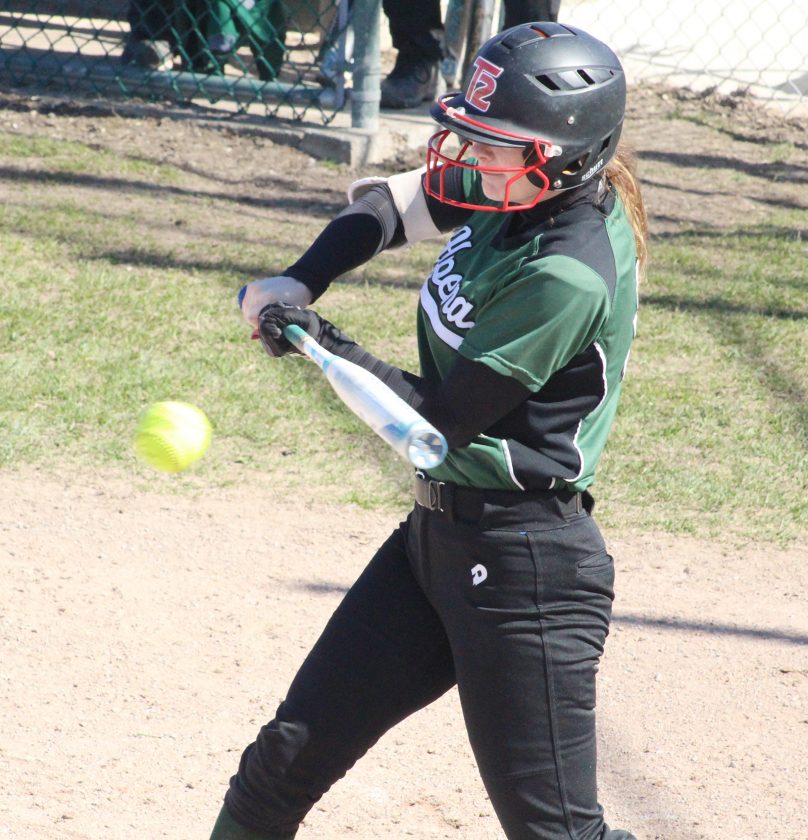 News Photo by Jonny Zawacki Alpena's Emma Fraser hits a single during the first inning in game one of a Big North Conference doubleheader against Traverse City West on Tuesday at Alpena High School. Fraser came up with the game-winning hit in game two to help Alpena sweep the Titans.

The Wildcats were challenged, but made the plays and came up with key hits when they needed to remain unbeaten in BNC play and sweep West, defeating the Titans 6-4 and 5-4.

After turning a bases loaded double play to end game one, the Wildcats late in game two.

Alpena held a 1-0 lead after three innings when Abbie Funk singled with two outs, stole second and came around to score on a single up the middle off the bat of Emma Fraser.

Alpena’s lead was short lived as the Titans responded with four runs in the fourth inning to take a 4-1 lead.

The Wildcats chipped away at the lead in the sixth inning when Meghan Roznowski delivered a bases loaded single to plate two runs and cut the lead to 4-3 after six innings.

West was on the verge of extending the lead when the first two Titans walked to lead off the top of the seventh.

Lilly Lewis came on to relieve Fraser who started the game in the circle and Lewis came through retiring the next three batters to keep West in check and not allow any insurance runs, which set up the late game heroics for Alpena.

Riley Alexander led off the home half of the seventh with a single and Allie DeRocher came into pinch run.

Fraser stepped into the box next and the senior delivered the game-winning base hit up the middle to score Funk and complete the sweep to keep the Wildcats in the driver’s seat in the BNC.

“We knew coming in this was going to be a critical game in the BNC,” Alpena coach Paul Marwede said. “With our victories tonight, everyone in the conference has at least a pair of losses and we control our own destiny and have a two game lead on each of the teams in the BNC. We know what we have to do and there is a lot of ball left to be played, but we just need to take care of business the rest of the way in order to win another BNC title.”

Lewis picked up the win in game two for the Wildcats.

In game one, the Wildcats found themselves trailing 2-0 early when Brittany Steimel blasted a home run to right-center field to put West on top early.

Alpena answered with a run in the first inning, two runs in the second and three more in the third to take a 6-2 lead.

The Titans scored two runs in the fifth to cut the lead to 6-4 and gave themselves a chance in the final inning.

Leading by two runs, Jade Schultz relieved Fraser who started in the circle.

West loaded the bases with one out in the top of the seventh and Schultz got Darcy Daenzer to ground into a game ending 1-2-3 double play, pitcher to catcher to first base as catcher Allie Funk threw a seed over to first base to complete the double play and end game one.

Fraser picked up the win on the mound in game one and Schultz earned the save.

Offensively, Fraser and Dayna LaBell each collected a pair of hits. Fraser had an RBI and stole a base and LaBell added an RBI and scored a run. Allie Funk, Schultz, Corine Donajkowski, Sydney Chojnacki, Aubree Sheldon and Roznowski each collected a hit in game one. Sheldon scored a pair of runs and stole a base and Roznowski and Donajkowski also chipped in with a run scored.