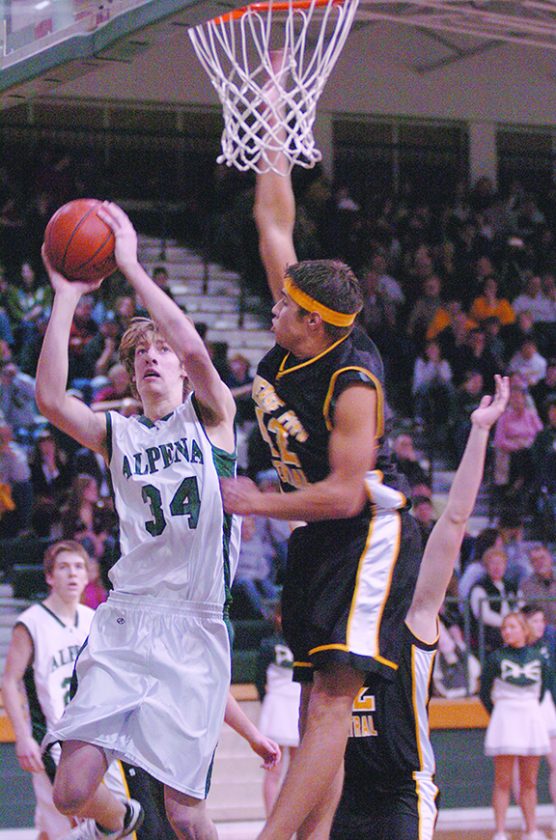 News File Photo Alpena’s Eric Puls (34) battles a Traverse City Central defender underneath the basket in this News file photo. After a prolific high school career and playing at Michigan for two seasons, Plus will enter the Alpena Sports Hall of Fame next month.

One look at Eric Puls’ resume reveals a plethora of individual basketball accomplishments.

But Puls’ impact on the court was about more than what showed up in box scores and he made his mark as a team-first player who was always ready to whatever was asked of him.

“I’ve always been focused on team goals,” Puls said. “It’s fun to win and I’ve always willing to do what’s asked to help the team win.”

Whether he was starring on the hardwood for the Wildcats or playing an important role as a scout team player for Michigan, Puls never shied away from helping his teammates.

“It’s a great honor,” Puls said of his upcoming induction. “There have been a lot of gifted athletes to come Alpena, especially being from a small town.”

At 6-foot-10, Puls cut an impressive figure on the court and became one of Alpena’s most reliable players during a three-year varsity career as a big man who could shoot.

“He had size, but he was a good three-point shooter. He always had that outside perimeter game and he worked on that,” Alpena coach John Pintar said. “We always say as coaches that you get what’s coming to you if you work hard and you can’t find a more humble person than Eric.”

As a junior, Puls averaged 19 points and seven rebounds while being named Alpena News Player of the Year, earning second team all-Big North Conference honors and a Class A all-state honorable mention.

Puls’ talents didn’t go unnoticed by opposing teams and he often found himself double or triple-teamed by defenders, who were instructed to play physical against him. Puls often ended up with plenty of bumps and bruises after games, but the attention paid to him by defenders opened up opportunities for players like Nathan Kindt, Alex Borchert and Sean McLain among others.

“There were games where he was just physically beat up,” Pintar said. “We had guys who were very good and took advantage of opportunities.”

With Puls averaging an area-best 20 points per game as a senior, the Wildcats gave Pintar his first district title as head coach in 2007, defeating Traverse City West 66-49. Puls had 15 points in the title win and poured in 30 during Alpena’s district semifinal win against Marquette, including Alpena’s first 14 points.

Puls said winning the district championship was his favorite moment of his career.

“Winning a district championship for the first time was a big team accomplishment,” Puls said. “I knew Alpena hadn’t won a whole lot of anything, so to get a trophy was really cool.”

He drew interest from several Division II schools, but a conversation with Alpena assistant principal Romeo Bourdage and a few connections eventually put Puls’ game film in the hands of John Beilein, who took over at Michigan in April 2007 and Puls ultimately ended up in Ann Arbor as a preferred walk-on.

With a roster that included Manny Harris, DeShawn Sims, Zack Nowak, Stu Douglass, Darius Morris and Jordan Morgan, Puls’ faced an adjustment period and played sparingly in two seasons. But, like he did for the Wildcats, Puls’ was willing to do whatever he could to help the team and he became a valued scout team player who helped the Wolverines adjust to Beilein’s coaching style and exact attention to detail.

Puls appeared in 13 games for Michigan over two seasons, recording 13 points, two blocks and three rebounds. He also gained a small amount of media attention during the 2009 NCAA Tournament when he played the role of star Oklahoma freshman Blake Griffin in practices ahead of the Wolverines’ second round matchup with the Sooners.

Puls left the Wolverines in 2009 to focus on completing his engineering degree, but said he was grateful to have the chance to play Division 1 basketball.

“That was my job. To do the best I could to show our guys what other teams were going to run and how to prepare for them,” Puls said. “I was grateful to play for Coach Beilein. “You could tell he was going to get the program where he wanted it to go, no matter what it took.”

Puls’ list of accomplishments is undoubtedly impressive. But his legacy as the ultimate team player is just as important and it’s what Puls remembers most about his career as he prepares to be enshrined among Alpena’s all-time greatest athletes.

“It’s something you’ve got to be prepared for, whether you’re going to be the focal point or a role player,” Puls said. “I was fortunate to be able to contribute and help my team.”

Tickets for the banquet are $17 per person and can be purchased at Perch’s IGA, The Alpena News or by calling Barb Mischley at 989-354-2247.