What the kids want 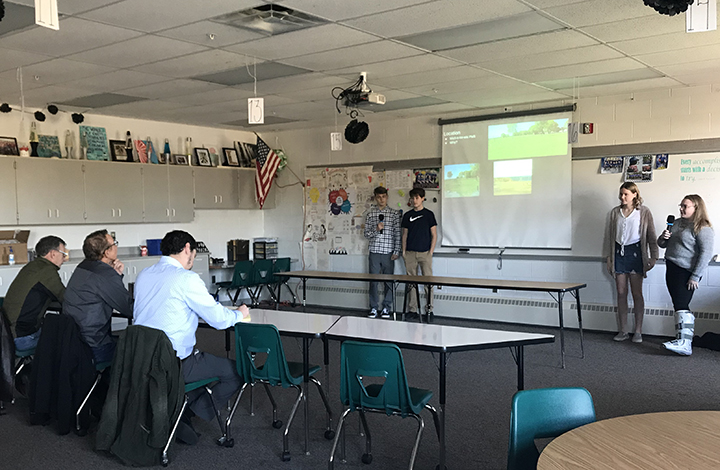 ALPENA — An ice rink, a basketball court,a dodgeball pit, and a sports dome.

Those are just some of the projects Thunder Bay Junior High School eighth-graders proposed on Thursday to Alpena Mayor Matt Waligora, city Planning and Development Director Adam Poll, and Jim Klarich, director of economic development for the Alpena Area Chamber of Commerce.

“As part of their project-based learning class in eighth grade, they learned about how citizens have a voice in government and they’re expressing some ideas they had,” teacher Angie Samp said. “They’re talking about what the youth of Alpena see as valuable in the town and how we could improve it.”

Eighth-grader Trevor Kasubowski said Waligora sent the students a letter asking what can be done to improve Alpena, so each group worked together to figure out an idea, what would be needed to accomplish that idea, the estimated cost, and how it could impact the community.

“We had to make an online proposal and we had free reign to come up with our own ideas,” eighth-grader Avery Samp said. “We found our own funding stuff, came up with our counter claims. It was pretty much all on our own. It was really fun.”

“With all the technology that we have at our fingertips, it was fairly easy to find everything we needed,” Kasubowski said.

Angie Samp said having an authentic audience like Waligora, Poll, and Klarich added value to the projects.

“This makes it real,” she said. “They’ve been working really hard, practicing after school, whenever they have extra time, so that they can be really prepared.”

After each presentation, Waligora, Poll, and Klarich gave feedback to the students about their proposal. They told the students to attend meetings so city officials can hear from people about what they want.

Some groups had proposals that involved Mich-e-ke-wis Park. Poll told the students the city is hosting a public input session Wednesday to reveal a series of preliminary design plans for improvements to the park.

“They know what’s needed,” Angie Samp said of the students. “They have solutions for our mayor, and that’s awesome.”

The students hope their proposals can one day become a reality in the community.

“It would be cool to see something that started off as a Google slideshow come into action,” Kasubowski said.

Searching for a winter’s smile