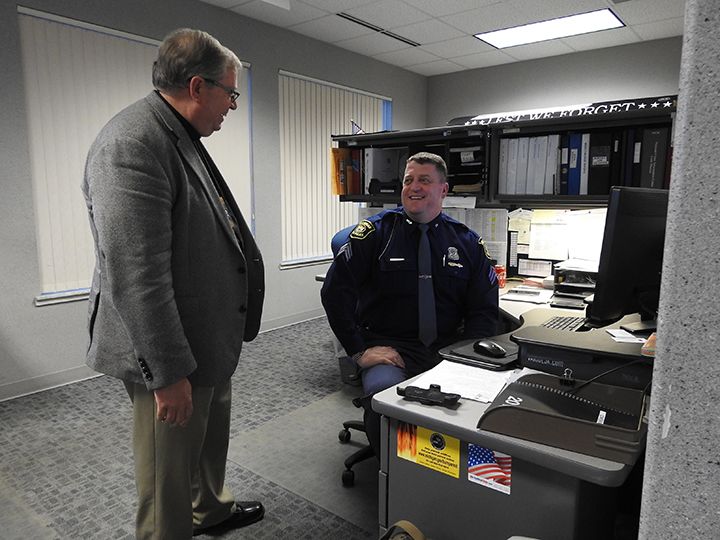 ALPENA — “You’ve got to be able to adjust spiritually,” the chaplain said, the rectangular police identification dangling from a lanyard around his neck reflecting the square of white set into the black collar at his neck.

“I don’t care if you’re a Christian or not,” the Rev. Randy Conley said in the small, unadorned back cubicle in the Michigan State Police-Alpena Post that’s designated as his. “If you have the sense that there’s something bigger than yourself that you can tap into, it’s an important thing to have.”

The official police chaplain for the post, Conley spends most of his time there chatting with the officers manning the front desk or lingering in the staff room, shooting the breeze with men and women in uniform as they go about their work.

He’s also on-call around the clock for the officers at the post as its volunteer chaplain, something many public safety agencies offer officers.

The designated go-to for spiritual guidance and emotional support, Conley hangs out at the post a few times a week, offering a listening ear to anyone who has had a tough shift, has stress at home, or just needs to talk. He calls it “ministry of presence.”

Troopers who need a deeper level of counseling are referred to professionals, Conley said, but, if there’s a need that concerns spiritual matters, “bring it on.”

The work of a police officer puts him or her into regular contact with a side of life that can be hard on the heart. Northeast Michigan is, compared to larger cities downstate, peaceful. Still, Conley said, its communities are increasingly touched by the outside world.

Domestic violence, drug abuse, children neglected or worse, human trafficking, cruelty — even in a largely safe region, the dark side of human nature is alive and present here, and it’s a police officer’s job to get up close and personal with it.

The things police officers see, the situations in which they are asked to intervene, day after day, can take a toll on a person’s emotional and spiritual health, according to Conley.

“If you have to take care of a domestic dispute issue and you’re supposed to go home after your shift and be Mr. or Miss Nice Person, it’s a spiritual issue, whether you’re a believer or not,” Conley said.

As he spends time at the post, Conley connects with the troopers, learning about their families and their lives and letting them see he cares about them. Last year, he made a special dinner for the officers on duty on Christmas Day.

Occasional ridealongs bring the chaplain into the world of the officers, giving him a first-hand glimpse of their work. Now and again, he’s called on to come at a moment’s notice, sometimes having to shake sleep out of his eyes to console a hurting family, accompany an officer for a death notification, or be a solid presence in an emergency.

“When you’re in the midst of one of life’s most traumatic events, I think chaplaincy is a very viable thing, whether you’re a person of faith or not,” Conley said. “You can be the calm voice in the midst of storm.”

Side-by-side with officers, Conley has seen the counseling they themselves offer as part of their job. He described police interactions with “frequent fliers,” those people officers see over and over, and officers’ efforts to get them to listen, to change their ways, to make better decisions.

“I’m surprised by how much they care,” Conley said.

Conley has been chaplain at the post for about a year and a half, ever since a chance conversation at a Mexican restaurant led him to fill the open position. Before moving to Alpena, he served chaplaincies at an ambulance service, a fire department, and a hospital in other parts of the country.

Preparation for the volunteer position included a six-month vetting process (“Boy, do they dig,” Conley said) and a downstate training that exposed him to such police situations as high-speed maneuvers and shoot-or-don’t-shoot scenarios, helping him understand the stresses of police work. He learned to perform CPR, apply a tourniquet, and shoot a rifle, preparing him to be a help and not a hindrance in the event of a dramatic situation.

Mostly, though, he’s just one of the guys, shooting the breeze. Just being there, ready to listen.

“You do see a lot of hurt,” he said. “But I think that can strengthen you when you learn how to handle it. The human condition is what we all live in. And we have to help one another.” 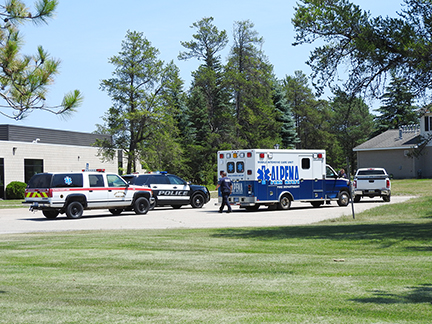