Going once … sheriff moonlights as auctioneer 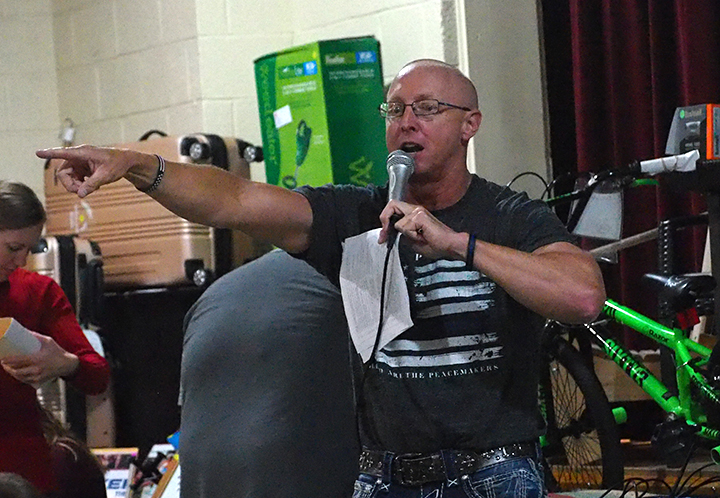 ROGERS CITY — “Boom! You bought it,” the auctioneer called, the crowd erupting in grins as the high bidder waved a hand happily.

It was another fundraiser dinner and live auction in Rogers City, once again conducted by Joe Brewbaker, full-time Presque Isle County sheriff and part-time aspiring auctioneer.

The hobby took root in the early 1990s, when Brewbaker disk-jockeyed for a teen dance at Roger City’s Grambeau Education Center. He liked it. From there, he took on gigs at dances and parties.

Brewbaker credits those early days for his comfort in front of a crowd and his love of entertaining.

“Anybody can play music,” Brewbaker said. “But if you have the right personality, I think it makes it fun.”

From DJ-ing, his off-hours career moved to radio broadcasting, announcing basketball games on 99.9 FM for the past 26 years, “Joe the Voice” working side-by-side with Rogers City police officer Matt Bisson, known to loyal listeners as “Matt the Stat.”

Brewbaker’s high-energy style proved a hit with locals, netting him invites to emcee events around the area, from Chamber of Commerce dinners to Memorial Day ceremonies to pageants.

Three years ago, the regular auctioneer at the Harbor Nights fundraiser at St. Ignatius Catholic School in Rogers City couldn’t make it, so they asked Brewbaker to fill in.

Turned out, he was good at it.

Other events started to take advantage of Brewbaker’s gift of making people have fun while spending money.

Still a regular as the voice of community occasions, and even sometimes invited to host events in other parts of the state, Brewbaker is now also the go-to guy for local auctions, despite his not having an official auctioneer training.

He does plan to attend a 10-day auctioneering school in Ohio, as soon as time permits.

Every auctioneer, he has learned, has his own chant, the sing-songy string of words that machine guns off the auctioneer’s tongue.

At home, he practices.

“Two and a half, now five. Five, six and a half, seven and a half, now eight,” he chants at a breakneck clip, the numbers ready on his tongue for the day of an auction. He rehearses sales, too, a pop bottle on his kitchen table auctioned off to an imaginary audience.

“All in, all done? Boom, you bought it,” he crows, arm flung forward toward the bidder, reveling in the fun of the sale.

Auctions, or dinners, or weddings, ought to be fun, Brewbaker said. Ready with a smile of his own, he loves to make people laugh, loves to see them relax and be happy.

Grinning broadly over the microphone in his hand, teasing the event planners and praising the cooks, Brewbaker plays with the audience, arm extended, body bouncing and dipping as he fishes for a higher bid, animated movements engaging the nodding, smiling crowd.

It’s fun for him, and it’s fun for them, he said. And that’s all he wants.

“It still shocks me when they ask me, to be honest,” Brewbaker said with a contagious grin. “I’m like, Why? I’m a clown with a microphone. And that’s probably why it works.”

In small-town northern Michigan, people are ready to be happy, he thinks. People come to events looking for a good time, a laugh, a smile.

Being the one to provide that smile is a way he can serve the public, Brewbaker said. He’s been a fixture since he was 13, bagging groceries at the local store.

Police work brings officers into people’s lives at some hard moments. They need someone who can put them at ease, comfort them, help them through a bad time. Sometimes being the happy guy helps him help them, Brewbaker said.

As the boss at the sheriff’s office, he and his grin are also there for all the others wearing uniforms, who sometimes need to be lifted up, just like anyone else.

Recently, when the officers learned a coworker was seriously ill, they called Brewbaker, who was away at a conference.

Come back, they told him — come back and do what you do to help us feel better.

Whether wearing a badge or a T-shirt and and sparkly, auctioneer-style belt, Brewbaker uses the weapon he knows best to combat the negative in the world.