What does it take to properly fund schools?

Group says state needs to up investment in kids 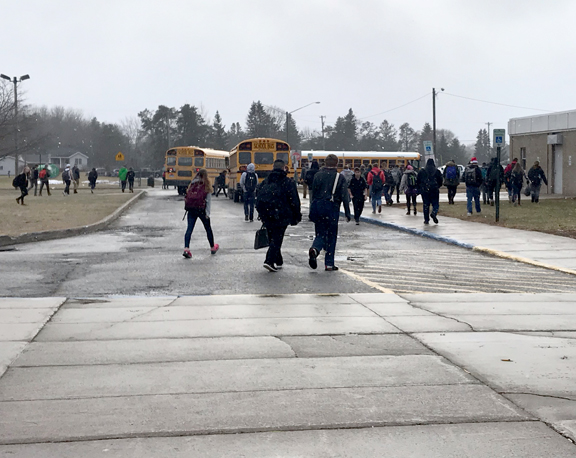 News Photo by Julie Goldberg Alpena High School students get on school buses after school is done on Friday.

ALPENA — There are a lot of barriers that can prevent students from being succssful in education, former state Rep. Matt Gillard of Alpena recently told The News, and state funding for schools should help students overcome those barriers.

The School Finance Research Collaborative released a 300-page report in January demonstrating the need for reform of Michigan’s school funding system, which showed that the base per-pupil cost to educate a K-12 student in Michigan is $9,590 and that does not include transportation, food service, or capital costs, researchers said. That is far less than the $7,871 minimum per-pul the state currently provides.

Lawmakers on Friday approved a budget that would take $1.1 million over the next two years from school districts within the Alpena-Montmorency-Alcona Educational Service District.

The study was Michigan’s first comprehensive school adequacy study that determined the true cost of educating all students to make the way to fund schools fair.

The School Finance Research Collaborative is a group of business leaders and educators from around the state who agree that it’s time for a change in the way Michigan schools are funded. Gillard, a School Finance Research Collaborative member and president and CEO of Michigan’s Children, said the group came together as a recognition that the school funding system is outdated and needs to be updated.

Gillard said the $9,590 his group says is needed to educate a K-12 student in Michigan is in line with other states. He said there are some states that invest more in students and some that don’t invest quite as much. The real takeaway from the report, he said, is that there are a lot of important factors that need to be considered when it comes to funding students in Michigan, including poverty, special needs, and the need to provide career and technical education programs, Gillard said.

“We’re recognizing that taking those factors into consideration when designing and developing the school funding formula makes a lot of sense and helps kids get resources where they’re most needed to help all students learn and succeed in Michigan,” Gillard said.

Steve Wasko, co-chair of the School Finance Research Collaborative, said the current school funding is “a one-size fits all approach.”

Gillard said that, if a breakdown was done of the student population in each district in Northeast Michigan, one would see a lot of barriers to educational success.

Wasko said the four counties are impacted by the student-to-counselor ratio. He said there is one counselor per 700 students, but it should be 250 students to one counselor.

Gillard said a topic that is not a part of the report but should be is facilities. He said the study focused on the business and operations side, and not on the infrastructure side of the education system. He said there’s a huge disparity around the state when it comes to facilities.

“That’s an issue that I think is troubling in our rural areas, especially under the current structure, the difficulty in raising local funds to keep up with the buildings and the infrastructure,” Gillard said.

The cost to educate a preschool student is $14,155, researchers said. Gillard said there are a lot of factors that go into that, including the low student-to-teacher ratios.

Gillard said people should understand that other states are surpassing Michigan or have already surpassed Michigan in a lot of educational benchmarks. He said those states have kept up with research into best educational practices and it shows the different factors and how those factors impact student lives.

“Designing a school finance formula that takes those into account has been done,” Gillard said. “We’ve seen from other states and we’ve seen evidence even from data that’s been done here in Michigan on what this takes to better prepare our students for educational success and then life success, but we need to catch up with the times.”

Researchers based their recommendations on a statewide measurement of school needs and have not calculated individual districts’ needs.

Locally, schools received amounts ranging from $9,614 per student in Rogers City Area Schools to $11,148 per pupil in Alcona Community Schools from local, state and federal sources during the 2016-17 school year, according to the most recent data from the Michigan Department of Education.

It wasn’t immediately possible to compare those amounts to the recommendations from the School Finance Research Collaborative, because various factors in each district — such as poverty, enrollment figures and more — would change the amount the collaborative says each district needs.

People can visit the School Finance Research Collaborative website at fundmischools.org to learn more about the group and read the 300-page report that was released in January.

The School Finance Research Collaborative says it takes at least $9,590 per student to provide a proper education to K-12 students in Michigan. That figure does not include other costs, such as transportation, food service, or facilities.

Here’s a look at how much each district in Northeast Michigan received from local, state and federal sources in the 2016-2017 school year to cover all expenses: