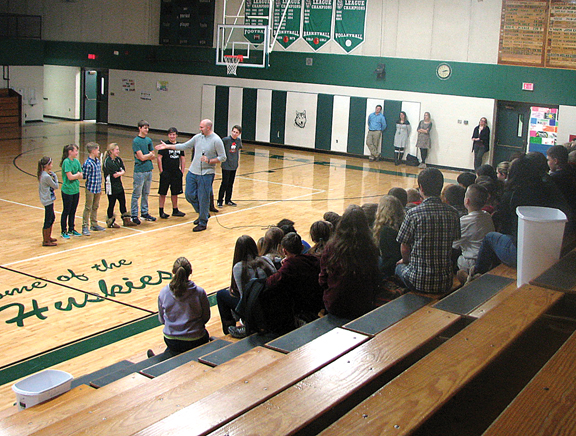 News Photo by Tyler Winowiecki Anthony Ianni, who was diagnoised with autism at the age of four, speaks to students at Atlanta Community Schools about bullying and other topics he is passionate about. Ianni is travelling across the state as part of the Relentless Tour.

ATLANTA — Students at Atlanta Community Schools listened to former Michigan State University basketball player Anthony Ianni speak about bullying and other topics that are close to his heart.

Ianni — who is six foot nine inches with a size 18 shoe — was diagnosed with autism spectrum disorder at the age of four and was bullied throughout his childhood because of the autism and his size. However the bullying did not stop him from living out his dream of playing Division 1 basketball and receiving several awards along the way.

Ianni is traveling all across the state as part of the Relentless Tour sponsored by the Michigan Department of Civil Rights. Lt. Gov. Brian Calley kicked off the tour in Lansing with the aims to reach 659 schools statewide.

Speaking in the gymnasium Ianni told students the three keys to success in life were motivation, hardwork and support.

“I guarantee everybody in this gym that if you follow these three pieces the rest of your life, not only will you go far in your life and do what you love to do but I guarantee these three keys will make you better as a person,” he said.

After sharing with students some of the reasons he was bullied while he was in school, Ianni also discussed how he overcame the adversity. This was not through a clenched fist or mean words but through his actions, Ianni said.

He also warned would-be bullies to think twice before making fun of the next person.

“Best be careful what you say and do to others in life because you never know what the other person might end up being,” he said.

Ianni said while he knew he would not end all acts of bullying, he understands where the change could begin.

“All of those great changes in our towns, cities and state — I am not the reason,” he said. “Let me point out the real reason for the changes around this school, around your community and state is gonna be: it’s you guys.”

Ianni said the reason he is helping to spread awareness to these important issue is the children.

“Just meeting everyone and hearing their stories and who they are,” he said. “It is an honor and a privilege to meet all these great kids not just in Atlanta but across the state.”

Tyler Winowiecki can be reached via email at twinowiecki@thealpenanews.com or by phone at 358-5688. Follow Tyler on Twitter tw_alpenanews. Read his blog, Just a Thought … at www.thealpenanews.com.